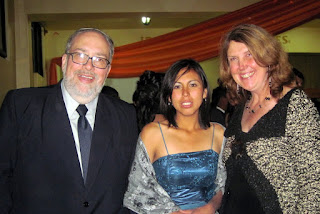 This week we have been to two festive occasions--one was the freshman reception of our young friend Medali, who has been helping with translation on campaigns. She is studying Gastronomy at the Arts Institute. 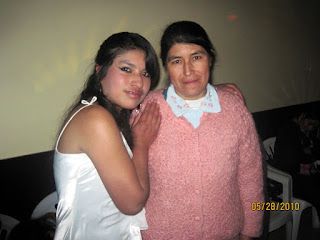 This is Betsy, also studying Gastronomy. She was at the reception with her mother, Victoria. Victoria and Betsy were prayer requests last December when their motorcycle flipped crushing Victoria's legs. Victoria is now walking with a cane. She is a very strong lady and says it only hurts a little. 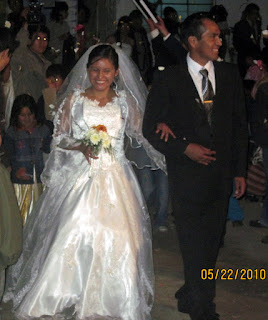 The other festivity was the wedding of Pastor Wilfredo from our church (a graduate of the Mobile Bible Institute that was here in Andahuaylas). Here he is with his new wife Fany. Willy was also a prayer request--he was one of the missing church planters. Fany is from one of the areas where he was planting churches. 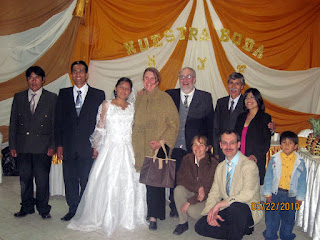 Here is the happy couple along with all the missionaries, Peruvian or foreign, that attended the wedding. (and a little boy who was in every picture :)

by Tammy Riggs el May 29, 2010 No comments:
Email ThisBlogThis!Share to TwitterShare to FacebookShare to Pinterest

People here in Apurimac had plenty of opportunities for conferences here during the last few weeks. We brought the Thompson Bible conference here to Andahuaylas and got Bibles in the hands of 63 leaders here in the local city area.

Also during the same week we were visited by Pastors Chad Barrett and Bard Letsinger. Chad, who presents seminars on evangelism, wound up leading 200+ people to the Lord, training over 400 en presenting the gospel. They came to learn how to present the gospel, and found out that they didn't know what it was! This isn't surprising, due to the confusion and lack of education in the churches here.
Bard presented seminars on marriage and dating--something we are asked to do about once a week and just haven't been able to, so God sent us help! Many lives were impacted, and one result was that a young couple in Nueva Esperanza have decided to tie the knot after living together for three years. Both are new Christians.

It was a great few weeks, and we really enjoyed seeing others get to enjoy the ministry here!
by Tammy Riggs el May 24, 2010 No comments:
Email ThisBlogThis!Share to TwitterShare to FacebookShare to Pinterest

A great illustration from our "conferencistas"

We spent the last week hosting conferences by two visiting pastors from Texas, Bard Letsinger and Chad Barrett. Since I was translating for Bard, I have told this illustration once or twice a day all week, and I still think that it is great!
Bard starts out the conference showing the people a little stuffed lion named Leo that his 6yo daughter sent with him to keep him company. He and his daughter play a game with this lion--she hides him and says she can't go to bed unless the Leo is found. Then Bard finds the lion and puts him on his head and says "I don't know where he is. You'll just have to go to bed without him." Then she sees him and they laugh and she gets tucked into bed with Leo, because he is a cute cuddly little stuffed animal.
But what is a real lion like? It's a ferocious beast with sharp teeth and claws. It would rip you to pieces. You would never tuck it into bed with your 6yo daughter.
1 Peter 5:8 says that the devil is like a roaring lion, looking for someone to devour. But when Satan tempts us to sin, he doesn't present himself as a ferocious beast. Instead he presents himself and the temptation as harmless and enjoyable--something to embrace that will make you feel better. But the reality is that sin is the lion that will devour you spiritually, and ruin your life.
The verse starts out with the answer--be sober and alert. Be on the lookout for the real lion disguised as a cuddly toy. Don't be fooled! Verse 9 says resist and stand firm in the faith. Trust God's word to show you what's right and wrong.
by Tammy Riggs el May 23, 2010 No comments:
Email ThisBlogThis!Share to TwitterShare to FacebookShare to Pinterest

"One final question. Will Brother C. give half of his support to Pastor B. because he doesn't have any support?" This question was fired off angrily by the treasurer of the group.
"I couldn't begin to say. I can't speak for him, " Mike answered.
"Yes you can. You are his chief and you can force him to do so. It's only right."

At moments like this you suddenly realize that there is wide chasm in understanding. Two groups have completely different sets of ground rules, and communication as you know it is not going to happen.

The scene was a surprise meeting called between the board of Kausay and us to discuss 7 questions. Most of them had to do with Mike's assistant.

After Mike's heart attack, Believer's Bridge (the new name of our mission board, in case you missed that.) picked up a national missionary to be his assistant. When they had been in Peru the year before, they had met Cayo Cardenas and had been asked by Kausay to consider supporting him. They had prayerfully considered this and decided to put him on as a missionary of Believers Bridge. He has been a great help in getting things coordinated for Thompson Bible Conferences and translating materials into Quechua for the Institutes in the country. He is a hard worker, has a seminary degree, is a good teacher, and speaks Quechua.

What could be the problem?

The problem is that Kausay is a mixture of cultures, American, Spanish Peruvian, German, and Quechua Peruvian. And in the eyes of the Quechua Peruvians it was all wrong. It was wrong to pick one person out of the group--the whole group should have been supported. Since the time of the Inca Empire (and maybe before) their rule has been "share and share alike." Today that concept rules only in the native communities, the group that we are working with in the countryside here. In that society the individual has very little rights or importance--what is important is the community.

To make things more difficult, they didn't say this when the missionary was announced as hired. Instead they suggested a higher salary than they believed he should have, figuring that they would compel him to give up the rest, as is customary in the communities. They do not view this as dishonest.

As God would have it, Believers Bridge has not raised that much support for him, so he is receiving a few hundred dollars a month at the present. Still, this contingent thinks that he should give up half his salary. And if the situation were reversed, they would think that the other man should give up half of his.

Even though the "share and share alike" group is the minority, they are very vocal. This problem isn't going away. And clearly this is an attack of Satan just when everything is getting ready to really happen. We ourselves have been thrown into the "different and bad" phase of culture shock at the moment--and right when we don't need this distraction!

Please pray for a peaceful solution, or at least just peace, forgiveness, and a workaround for the problem. We know God has all power to stomp out the fires of cultural conflict. Pray for everyone to focus on the real work of ministry.
by Tammy Riggs el May 06, 2010 No comments:
Email ThisBlogThis!Share to TwitterShare to FacebookShare to Pinterest
Newer Posts Older Posts Home
Subscribe to: Posts (Atom)