1:30 in the morning.  It is wet and cold.  I am standing in mud halfway to my knees working with many other bus passengers trying to dig a semi out of the mud so that we can get home to Andahuaylas.  This is the last stretch of journey that started a week ago, and I am tired.

It all started Monday, Feb. 18.  It is never a good idea to travel during the rainy season of January & February, but we didn't have a choice.  The changes in the immigration laws and the ones that have come from the religious freedom law have made it necessary to try to get an extension (which we hoped to do in Cuzco) or to cross the border by the 23rd.  The new laws, supposedly written to make things easier for  Evangelicals here in Peru, have actually made life more difficult.  We have been doing like many missionaries and keeping ourselves legal here by doing a border crossing every 6 months.  But now they can only give a 6 month visa once per year, the others can only be 3 months long.  Due to ...complications, we have to do everything over again to get the resident religious worker visa again.  The costs are staggering and with the falling dollar quite frankly out of reach at this time.

So, hoping to avoid the long lines, bureaucracy and corruption of the immigrations office in Lima, we decided to try in Cuzco.  If we couldn't renew our visas there, then we have to go to Chile from Cuzco and cross the border. 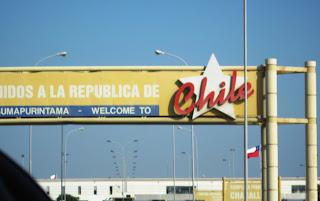 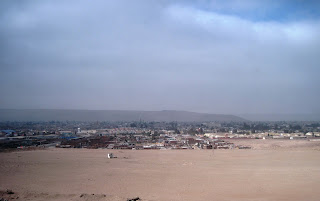 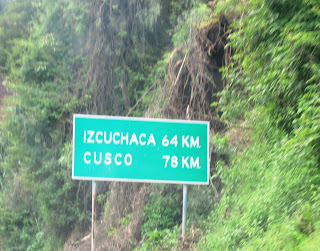 Our trip to Cuzco on Monday night was perfect, with no problems, giving us great hopes for the immigration office.  We spent Tuesday with the family of my secretary, Aydee, and got to sleep in beds Tuesday night.  Wedmesday morning we went to the immigration office with Miguel to see what our options could be.  There we got the bad news/good news answer from the director.  To renew our Religious worker visas we have to do the entire process all over again, that means several trips to Lima - immigrations, Interpol, embassy  and pay several thousand dollars.  Ouch!  But, the director was very helpful and told us about another option that we have, one that is usually not mentioned.  Becky can apply and get Peruvian citizenship on top of her American citizenship.  There are no obstacles, it just requires 4 stages of paperwork that will take about a year.  Then when she has her citizenship, she can ask Peru to give dual citizenship to her blood relations and it is again, merely a question of time and about $220 (if she gave us all the costs) per person and we will never need to do anymore paperwork or border crossings!  That sounds like a deal!

But, we have to make a border crossing by the 23rd.  So, we buy the bus tickets and leave that evening for Tacna and the Peru/Chile border.  The bus trip was very pleasant, it was on a bus line we have only used once before and we were a little nervous about how it might be.  Becky and Abby come with us to see Tacna and to spend some family time with us.

We arrive in Tacna about 5:30 in the morning, go to our usual hotel.  But there are no vacancies.  We go to every hotel we know of - no vacancies.  It is the last week of summer vacation and everyone who can is visiting family and friends, and Chileans are visiting Peru.  It began to seem like we would have to run to Chile and get back to take the bus back to Cuzco the same night--not a pleasant prospect.  But, we found a taxi driver who new of a couple of nice hotels off of the beaten path and we found a nice room at a decent price.

Tammy, Chris and I check in and leave Becky and Abby to have a nap while we cross the border.  No problems with the crossing, except the prices for the taxis have gone up.  We even got a 6 month visa coming back into Peru; the immigrations lady asked us how long we wanted and why.  When we told her we are working up in the Andes, she gave us 6 months!

We spent the rest of the day and the next one touring Tacna, a beautiful city in the Atacama desert.  It was a nice time with the family.  We had bought our return tickets on the same bus line that we came to Tacna on - San Martin.  We were anticipating another easy and comfy trip.  Boy! were we ever wrong about that.
We boarded at 7:30 at night and right away we saw that the bus was older than the hills and hadn't been cleaned for a long time.  There were bags of vomit beside the seats, the bus reeked of urine and the seats were small and uncomfortable.  But we hoped to just take a Dramamine and sleep through the trip - no big problem, we thought.  It is only a 14 hour trip.

It ended up taking us 20 hours to get to Cuzco.  The driver, who was drinking chicha, a homemade corn beer the whole night, also stopped in every little burg and picked up passengers.  A little extra for his pocket, but quite against the law and dangerous, that is how kidnappers and robbers get on buses.  He also flattened 2 tires on the back left rear so the bus had an awful list to port and he drove on the flat tires until he had gotten well out of town. Then the next afternoon, going up a mountain about 15 miles outside of Cuzco, the bus coasted to a halt.  He had burnt up the clutch.  The bus line said that they were sending out another bus to pick up the passengers, but it never showed and we had to flag another bus, pay another fare and ride in the aisles to Cuzco.  We arrived just after the last seats for buses to Andahuaylas had been sold.  So we had to spend the night in Cuzco - with our money running out and waiting until the next night (Sunday) to get our ride home.

The bus pulled out of Cuzco about 8 and we were making good time until we got to the still unpaved stretch of road at about 1 in the morning. There--stuck fast, buried up to the axles in a hairpin turn blocking the whole road-- was our stuck semi.  We finally got the truck out of the mud.  Chris did a good job of getting the driver to understand about rocking the truck to get it going and by 3 am we were back on the road.  About 6 am we pulled into town, exhausted and broke, but home at last.
by Mike Riggs el March 08, 2013 No comments:
Email ThisBlogThis!Share to TwitterShare to FacebookShare to Pinterest
Labels: Stories

A Week to Remember!


"Brother Mike, where are you.  The bus is going to leave Uripa soon".  I was sitting in the taxi from Andahuaylas to Uripa, about an hour from both towns, watching the driver repair his overheated engine.  The bus from Uripa - a minivan, or combi, actually - was going to take me to the middle of the next State, Ayacucho, where I was going to spend the week teaching Greek 2 in a seminary.  The driver got the engine cooled down and filled the radiator with water and I made it to Uripa, just in time to catch the bus, which had been waiting for me to start the 4-7 hour (depending upon the rain and road construction) trip to the city of Ayacucho.
January and February here are the rainy season, and we get TORRENTIAL rains that cause mudslides that can wash away or block roads, destroy villages and isolate towns.  As we crossed the river Pampas, which is low ground and jungle-like, the rain began to fall as we began the ascent up to the mountains of Ayacucho.  about 3 hours into the trip, just as my legs were beginning to cramp up, we came to a huayco, a fresh mudslide, that had blocked the road.  We just turned a corner and were in 2-3 feet of mud.  The driver managed to back us out of the mud - with help from another combi and some rope. I began preparing myself to spend the night in the altitude, around 15,000', with no blanket or food.  I did have a warm winter coat and a bottle of water at least. But, it was Sunday afternoon and classes were to begin the next morning, and the combi was half full of students and faculty of the seminary, so the driver decided to try another route.  We backed down the road for a couple of miles and we came to a turn off with a sign that said, "historic Inca road".  Oh goody!  A 700 year old road not made for vehicles with wheels (the Inca never invented the wheel).
We slithered and wobbled our way for about and hour and a half and finally hit the new road again and Praise God! it was clear.  We got to the seminary in time for supper.  The seminary was held in a school, with classrooms serving for bedrooms, kitchen and dining rooms and of course, classrooms.  The school was closed for summer vacation, so it was good use of a facility.  I slept in a classroom on a thin little mattress on the floor, in the same room as another teacher and his wife (from Mexico), her mother and brother, the other profs younger sister and brother who were students.  The food was typical "Andina cuisine" - potatoes, little breads, thin gruel and soup (which was mainly miscellaneous organ meat - not my favorite!).  The Mexican mother-in-law of my fellow teacher got very tired of the food and one day, I was told to eat very little supper, and after 10 pm curfew I was invited to a Mexican feast - home-made chicken tacos with home-made Pico de Gallo.  Yum!
Monday started classes.  Greek 2 turned out in reality to be Greek 1.  This seminary only functions in vacations, January and February, and they had forgotten what little they had learned last year.  It was large class - 23 students - and all but a handful were Spanish second language.  They had grown up speaking, reading and writing Quechua.  So, the majority of the students didn't even know or understand Spanish grammar terms.  But with classes from 8 am until 10 pm, we had plenty of time to work.  Eventually, all but 3 students passed the final exam and we have made arrangements for them to continue to study via email and their textbooks and I have agreed to come back next year and teach Greek 1 & 2.
On the way back, we encountered a blizzard in the altitude - snow, ice, hail, freezing rain - not falling on us but rather swirling around us.  The clouds came in from below us and were pushed up by the mountains.  The combi had no heat and I was so happy for my heavy winter coat that I bought in Ohio last year.  As we drove on we began to descend and the snow and ice turned to heavy rain.  Suddenly there was a loud roaring sound and a large chunk of mountain began sliding down to the road, with trees and boulders dislodged by the mud.  The driver stomped on the gas and we just made it, a large boulder hit the back left side of the combi and shoved us almost into the abyss on our right.  Everyone was wide awake for the rest of the trip.  We avoided one other mudslide by a few feet.  Then we had to drive through another 3 small slides, but after an exciting (I am personally a little tired of excitement!) trip I made it home safe and sound.