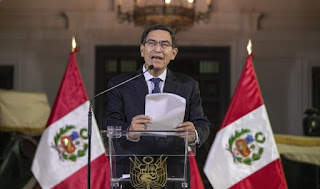 On October 1st, the President of Peru dissolved Congress.  Although this caused shock and widespread protests in Lima (mostly in favor of the dissolution and worried that Congress would hang on) for about 24 hours, since then things have gone on pretty much as normal.  Elections to replace the Congress are planned for January 26.

In the meantime, Chile and Ecuador have been plunged into violent rioting over economic issues. In spite of the enormous constitutional crisis that is going on here, Peru has remained peaceful.

Thank God for a peaceful transition, and pray for continued peaceful and constitutional resolution of this crisis.
by Tammy Riggs el October 30, 2019
Email ThisBlogThis!Share to TwitterShare to FacebookShare to Pinterest
Labels: #pray for peru