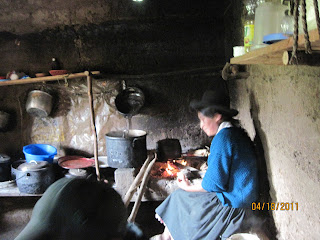 One of the ladies from the church helps us around the house.  For quite some time now she has been supposed to have her gall bladder removed, but has been putting the operation off.  She is finally going to do it, and the process has shown me that I still don't know everything about Peru.

When she went for her preoperative chest x-ray, they found her lungs to be "full of smoke."  She said that she saw the smoke and asked the doctor what it was, and he said it was from cooking with wood.  Like most Quechua, she cooks on an open wood fire at home.  And when I say open, I mean an unventilated fire inside the kitchen, which is enclosed.    In her case, she says that this is a problem in her other house, where the kitchen is a small shack.  In her normal house, the kitchen is large, (though enclosed) and she feels that this is no problem.

This is not her x-ray and I hope hers is not even close to this bad.  It just shows why she thinks the x-ray shows the smoke in her lungs. The x-ray is from "chronic obstructive pulmonary disease." Wikipedia. Wikipedia, 2011. Answers.com 13 May. 2011. http://www.answers.com/topic/chronic-obstructive-pulmonary-disease

I told her that breathing wood smoke is as bad as smoking.  Although she knew smoking was bad, she was sure that wood smoke was harmless because it is natural.  She was very upset when I told her that there was no pill to clean up the lungs.

It turns out that there is a high incidence of chronic obstructive pulmonary disease among rural women in all Latin American countries, for this same reason.  Although there are projects, even in Peru, for education in how to construct a better stove, the only time I have ever heard of it here a woman was telling me that there was a better stove that did not make your pots black, even though it used wood.  Looks like more education needs done!

Today I found out another thing.  She has the national health insurance, and so to have an operation she must have someone donate blood before her surgery is scheduled.  They told here it could be anyone.

I knew that the people here are very reluctant to donate (they think that they will die, that the hospital will sell their blood, etc.), so I said that I would if no one from her family could.  I told her I was a little unsure that my blood, which is AB+, would be very useful here.

Turns out I was right about that.  When I went today they would not even take my blood, because they said they would never need it.  I said that I might need blood sometime, and they said not to worry, since I was AB (universal recipient) they could give me just any blood, but mine would only be useful in an emergency and took my phone number just in case.  Then they told her to find another donor!

Okay, I guess I just always took for granted that they would have my blood type at the hospital, and that everyone knew breathing wood smoke is dangerous!  I guess the trick is not taking anything for granted!

Please pray for the women who are endangering their health just by cooking, and for our upcoming trip to Chile. (More about that later.)  And just maybe...that I don´t need any blood from the hospital. :)

by Tammy Riggs el May 13, 2011
Email ThisBlogThis!Share to TwitterShare to FacebookShare to Pinterest
Labels: Peru