After 7 months of visiting churches in the U.S., we are back home and at work in Andahuaylas, Peru.  We flew from Miami May 16 and arrived in Lima that night.  Changing seasons from late spring to late fall was a bit of a shock, but it was good to be back in Peru.

We stayed with Becky and Miguel for 4 weeks while we took care of some things that we can only do in Lima.  I got to teach the doctrine of the Holy Spirit at a high school, and got to meet with some folks about Christian bookstores about the possibility of somehow getting access to Christian books in Andahuaylas, and Tammy met with the directors of a language school about opening one in the mountains.  I also managed to get a nasty cold and cough, which sidelined me for a couple of weeks – that kind of put a crimp in our vacation time.  But we did get to spend a lot of time with Miguel, Becky, and Abigail.  My word, she has grown!  She is not a baby anymore.

Then we took the long bus trip from Lima to Andahuaylas.  There is a new bus that goes direct all the way, no need to change buses.  It is supposed to be only about 15 hours – great, huh?  However, the terminal has an outside waiting area, it was “raining” (in Lima that means a very wet fog with drizzle) and the bus was an hour late to pick us up.

We found out then that the clerk had sold Tammy one set of seats on the seat selection picture and written a different set.  So we got on the bus very damp, and were confronted with folks in (what we thought were) our seats.  The bus never could seem to get the DVD player to work correctly and there was no water in the bathroom, but the seats (we ended up with the seats we wanted thanks to some nice folks) were comfortable.  The bus driver, although we were already late, was in no hurry and we sauntered down the coast.  On the best roads of the trip we made a kind of pomp and ceremony progress.  We stopped for supper after 9 pm and had a lukewarm bowl of rather foul (fowl?) tasting chicken soup for only twice the regular price.

We crossed the cordillera of the western Andes (about 15,000’) at about 3 in the morning and it was very cold in the bus.  Outside there was more snow on and by the road than I have ever seen in Peru.  The driver, they must have changed, hurtled us through the night with reckless abandon, everything was falling and rolling around the bus – it made for some good prayer time!  About 10 am we stopped for breakfast.  Chris chanced the chicken soup again and got a good one, Tammy and I tried omelets and they were nice and greasy – shudder!  You don’t want to eat a bunch of grease when you are on twisting, winding Andean roads!  We were a little behind schedule at this time.  We were originally supposed to arrive at Andahuaylas around 9 am, but now they said we would get there around noon.

Back on the bus, now with a very hot sun beating in the windows and no air conditioning, we dashed forth once more.  It appeared that the driver was determined to make up the time.  But it was not to be.  We were stopped by police at a junction and we waited for almost an hour, no one on the bus knew why.  Speculation was rampant, maybe there is a bridge out, terrorists are on the road, there has been a wreck up ahead, the cops want a bribe – no one knew but we all had theories.

We got started again this time on a dirt road.  It is the dry season and the dust rose like a cloud of tear gas.  The sun was burning in the windows - remember that even though we are at a chilly altitude, we are still close to the equator – and the bus was HOT inside.  If we kept the windows closed, we were roasting, but if we opened them you had to put something over your mouth and nose, and even then you soon got grit on your teeth.  During this time we passed Kishuara, the highest point on the road between Abancay and Andahuyalas.  Tammy, for the first time ever got soroche (altitude sickness).

Thankfully, after a couple of hours of this, we hit pavement and knew that we were getting close, at least in distance.  That is when we hit the (what are they doing?!) road construction.  We would sit for a half an hour and crawl forward for a bit.  We finally hit the Andauaylas terminal about 4 pm - a trip about 22 hours long.  That is much quicker than the old way of two buses and around 30 hours, but it is not the 14 or 15 hours we had expected. 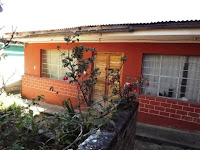 But, we are home safe and sound.  It is so nice to be in our own little house!