Our trip to Chile was uneventful, in a good way. 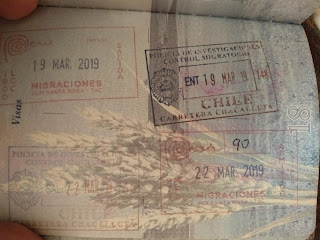 The border crossing process has been streamlined and was much easier to negotiate than in years past.  When we crossed back into Peru, we found out that more had changed than just streamlining the process. We needed to act, and fast, if we wanted to stay for the rest of 2019.

Travelers are allowed to stay in Peru for a maximum of 183 days within a 365 days period for touristic, recreational or health purposes

We started working on our resident visas in 2016, but we put that on hold because our new schedule had us traveling to the US more often. As a resident, you can't be outside of Peru for more than six months in a year without losing your residency.

We and many other missionaries who traveled frequently opted for the tourist visa because it is granted immediately in the airport upon arrival and didn't restrict your travel at all. As long as you left the country before your time was up, you could come back in again and get 183 days.

Our first surprise was actually when we entered January 1st and received only 90 days.  Our flight back is on May 23, but we figured we could leave and come back in.  And we were right about that.

However, the clerk that processed our entry in March told us, "I can give you days until your flight, but that will use them all up for this year."  Friends confirmed that this was now true--and that we needed to get to work right away to get our resident visas.

If we don't get our residency in Peru approved before our next trip to the US on May 23, we will not be allowed back in until 2020. And we have ministry planned from July until December.

Blame it on Nicolas Maduro

World politics has a way of affecting missionaries in ways you wouldn't think of. In our case, our predicament is at least in part due to President Nicolas Maduro's wild mismanagement of Venezuela.

His predecessor, Hugo Chavez, had implemented many expensive socialist government programs, funded by oil revenues. He was, after all, leader of the Venezuelan United Socialist Party. When he died in 2013, Maduro ascended to the presidency of the oil-rich country. When worldwide oil prices crashed, Venezuela did not have enough money to pay workers and continue these welfare programs. Maduro's government responded by simply printing more money. The results? Last year's 2,688% inflation rate, food and medicine shortages. Venezuelans are reported to have lost an average of 11 kilos in body weight, and crime and sickness are on the increase.

And the result that affects us? 660,000 Venezuelans immigrants fled to Peru. That's equivalent to all of Memphis, Tennessee, and then some. This resulted in a necessary and urgent update to immigration laws in order to process that many people.

This has impacted not only us but other missionaries that were in the country on tourist visas. When you pray for missionaries, remember that they are living in a country that usually didn’t invite them and doesn’t make laws to accommodate them. We are a relatively small number of people who can't vote.

We are moving as fast as we can on this--we have already done our Interpol check and are waiting for our appointment with Migraciones.

Please pray that we can get this situation resolved so that we will be able to reenter the country in July.

by Tammy Riggs el April 25, 2019
Email ThisBlogThis!Share to TwitterShare to FacebookShare to Pinterest