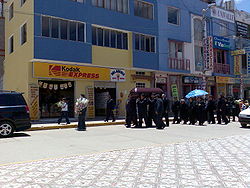 I get so mad when people ask, “Don’t you do anything useful?”

So now I tell them the story of Sister Primitiva. She suffered greatly and died because of false teaching.
She and her husband were members of the church in Talavera.  We had seen them at church, but didn’t know them.
Then one day the man came to our house.  He was what the Peruvians call a “humble” man. He wore a pair of unhemmed dress pants and the rubber tire sandals that are called yanquis.  He had urgent questions and also wanted us to pray for healing for his wife.
His urgent questions were a list of Bible verses.  He had been taught, (like many others) him that these verses meant that it was a sin for a Christian to go to the doctor. And he had been taught that you should just trust God for healing, because sickness is always caused by sin.
Mike went over each verse, explaining what was happening in the context. (Remember, a text without a context is a pretext!)  The man was more and more glad to see that sickness isn’t
just a result of unconfessed sin.  And that the Bible doesn’t forbid medicine.
Soon we left to go pray for his wife, Primitiva.  The house was fairly close by.  A half hour's walk led to a cluster of adobe houses that had grown one room at a time.  These maze-like houses had dirt floors.  Clotheslines hung across some of the rooms. There were few tables and chairs, and chickens ran in and out.
All the neighbors greeted us with kisses.  The man was eager to tell them what he had found out—sickness just happens, and God loves you anyway.  It is OK to go to the doctor. It is OK to take medicine.
Primitiva was sitting outside on a step in back of her house.  Her whole body was clenched tight because of the pain in her stomach.  My heart fell when I saw her.
“How long has she been like this?”
“Six months, maybe.”
Good free medical care had been available all this time from the German mission hospital.  If she had gone to the doctor, something could have been done. But she had spent months in needless agony.
Because of false teaching.
Her husband touched her on the shoulder to get her attention and told her the good news. "Sin brings spiritual death, not physical sickness. It's OK to go to the doctor."  But I knew in my heart that it was too late for her.  She would be having her healing in heaven.
Because of false teaching.
We prayed for her, but when my turn came to pray, all I could pray for was for a relief of pain and the promise of heaven.
They went to the German hospital.  She had stomach cancer, and it was far too late to do anything for her.
She died a month later.
Because of false teaching.
So that’s why we “just teach church people the Bible”.